After receiving the green light this week to reopen UC Irvine, the staff at the Institute and Museum of California Art are preparing a new exhibition called Radiant Impressions.

The exhibition focuses on 20th century Californian painters and how they worked with light. The exhibition from IMCA’s permanent collections as well as loans from private collections includes works by George K. Brandiff, E. Charlton Fortune, Elsie Palmer Payne, Arthur Grover Rider and signatures by Guy Rose, including “The Green Parasol” and “Laguna” eucalyptus. “

“Laguna Eucalyptus”, 1917, by Guy Rose from the Irvine Museum Collection.

Upon reopening, IMCA plans to take safety precautions including requiring face masks, limiting capacity to 12 people at a time, and limiting operating hours.

“Radiant Impressions,” which ran from May 15 to August 15, was scheduled to air last year to celebrate Jean Stern’s resignation as IMCA’s chief curator of California Impressionism in July 2020. It is one of the few exhibits since the museum was founded.

In 2013, UC Irvine officials learned from a lawyer of trust that an art collection amassed by Gerald E. Buck, an Orange County real estate developer, had been bequeathed to the university. The size of the collection was impressive – 3,200 paintings, sculptures and drawings focused on the art of California.

Stephen Barker, Dean of the UCI’s Claire Trevor School of the Arts, announced that the two collections would be the permanent backbone of IMCA in 2017. Until August 2019, Kim Kanatani became director of the museum after serving as assistant director and director of education at the Solomon R. Guggenheim Museum in New York. 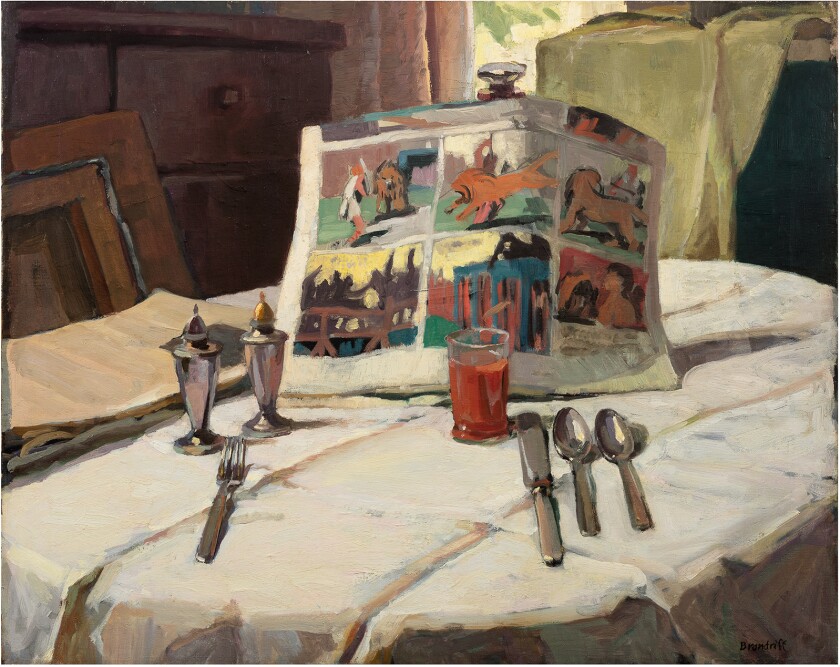 Three exhibits provided a small preview of the collections. “First Look: Introduction to the Buck Collection” showed 50 works, including the artists Peter Alexander, Richard Diebenkorn, Viola Frey and Helen Pashgian. “El Camino del Oro” focused on paintings from missions in California in the 1890s, and “Sublime Wonderlands” featured landscapes from the late 1800s to 1980s.

Although the museum is set to be built in the coming years according to the university’s master plan developed by architect William Pereira, the mezzanine gallery near John Wayne Airport houses the latest exhibits.

During its year-long closure due to the coronavirus pandemic, the room was used as part of a full documentation of the 4,500 works in the permanent collections, which took around two years to complete.

“The silver lining this time is that the galleries were empty so we could work in the gallery with COVID restrictions,” said Dawn Minegar, assistant museum registrar. “We can put works in the space we currently have and we can unpack them in more detail.” 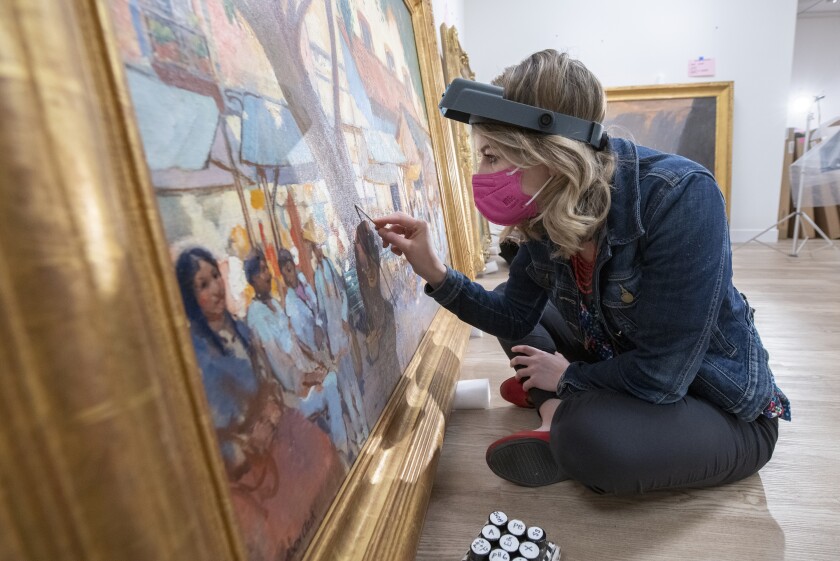 Morgan Wylder, an assistant painting curator at the Balboa Art Conservation Center, carefully wipes off a painting that is being prepared for display at the Institute and Museum of California Art.

Documenting the museum inventory made it easier to expand your digital presence through Instagram, newsletters and virtual teaching tours.

“We’re using Instagram as a vehicle to showcase the collection and we’re taking an educational stance,” said Erin Stout, curator and research fellow who topped the account along with PhD students who help with the research.

Although the collection of Chicano artists from the 1960s and 1970s is limited, the Instagram feed includes work and tidbits from artists Carlos Alamaraz, Frank Romero, John Valadez, Pattsi Valdez, Gronk, and Ester Hernandez.

The monthly IMCA newsletter, which currently has around 5,000 subscribers, offers recommended readings, links and videos on artists such as UCI graduate Chris Burden, who was featured in the April newsletter.

Virtual school tours with an artist educator via Zoom have reached approximately 1,500 public students in Orange County. The tours also include paintings in “Radiant Impressions”.

Most notably, the museum has made progress on its concept plans, which will be published in the coming weeks.

When Kanatani took over the direction, she wanted to figure out the vision for the museum before moving on to building the IMCA.

“We see IMCA as the epicenter for California art,” said Kanatani. “We envision our future building as a very compelling destination that is both locally active as a cultural catalyst and globally relevant as a pioneering investigator and presenter of California’s influence on art.”

IMCA has run focus groups and reached out to stakeholders to discuss the term “California Art”, including a discussion last summer with approximately 40 artists, scholars and former museum directors including Kevin Appel, Bridget R. Cooks, Scott A. Shields and René de Guzman and Chon Noriega.

“This is a startup advantage,” said Kanatani. “We can learn from colleagues. We can learn from the mistakes made in the past that the art world and museums are grappling with in an attempt to rephrase their thinking about diversity at the executive level, not to mention staffing. “

Meanwhile, as IMCA takes shape, its three annual exhibits and new digital resources could preview art taken from what is considered to be the finest California art collection that no one has seen. 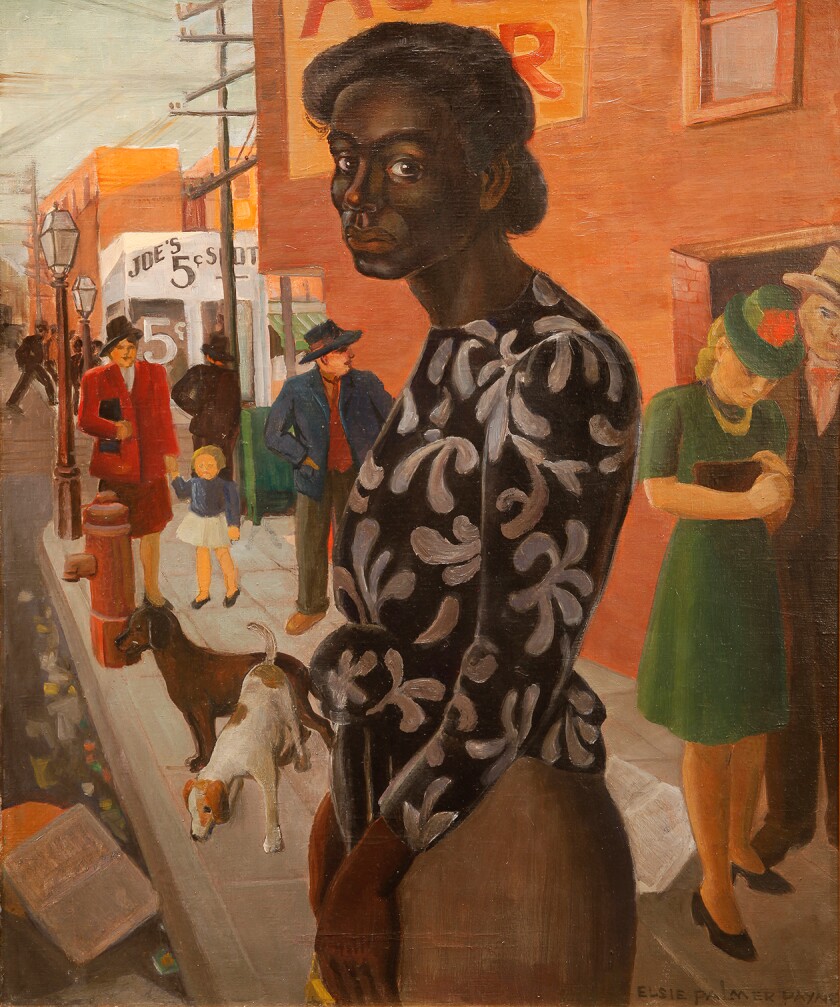 “Bus Stop”, 1949, by Elsie Palmer Payne from the Buck Collection.

Support our coverage by becoming a digital subscriber.