In recognition of his leadership in an era of unprecedented growth, the University of California, Irvine, has honored Retired Chancellor Michael V. Drake, MD by naming an important access road to the campus.

Michael Drake Drive replaces a section of Bison Avenue that begins at the intersection of California Avenue and ends on Ring Road near the campus center. The renaming was made possible with the Orange County Fire Authority and the City of Irvine.

Drake received this highest honor at an event on June 4th attended by campus and community leaders. He is the current President of the University of California System and was Chancellor of the UCI from 2005 to 2014. 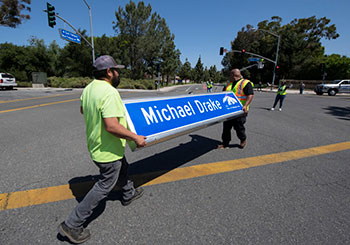 Michael Drake Drive is the southern entrance to the UCI and the main thoroughfare from Highway 73 to the campus and an important link to the growing health sciences campus
Photo credit: Steve Zylius / UCI

“I feel incredibly humble to be honored this way on the University of California Irvine campus,” said President Drake. “My family and I called UCI our home for almost a decade and that means so much to us. UCI has a very special place in our lives and I am so grateful that I have been remembered in such a meaningful way alongside my predecessors. “

“As visitors and members of our community walk onto campus in the decades to come, they will be reminded of the contributions Michael Drake has made to our progress,” said Chancellor Howard Gillman. “Not only was he the architect of the UCI’s rise to national and global importance, but he also set the standard in his commitment to the power of higher education to increase social mobility.”

Bison Avenue is the southern entrance to the UCI and the main thoroughfare from Interstate 73 to the campus. It is the primary link to the growing health sciences campus, which includes research and clinical buildings that are part of UCI Health and the Susan & Henry Samueli College of Health Sciences. The street leads to the academic core of the campus between the research buildings of the Faculty of Physical Sciences and the Faculty of Biosciences.

Campus leaders chose to rename Bison Avenue in recognition of Drake because it symbolized his reputation as a doctor and a member of the elite National Academy of Medicine. It also embodies his dedication to health sciences, both within the UCI and within the UC system, where he served as the UC vice president of health affairs before joining the Irvine campus.

Fortunately, Michael Drake Drive will cross East Peltason Drive, which was named in 1997 after Chancellor Emeritus Jack Peltason. Drake and Peltason were also both UC presidents. 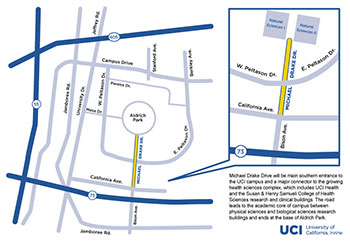 An era of unprecedented growth

Drake oversaw the creation of California’s first new public law school in over 40 years and directed the launch of public health, pharmaceutical science, and nursing programs and the founding of the School of Education.

Under his supervision, the UCI added more than 5 million square feet of new build, including the nearly 500,000 square foot UCI Douglas Hospital and the 275,000 square foot student center. The campus also received national recognition for its environmental sustainability and at the time had 11 buildings that received the highest possible LEED platinum certification.

During his tenure, the UCI rose from mid-teens to one of the top ten public universities in the country in the annual US News & World Report ranking. In addition to top position on Sierra magazine’s “Coolest Schools” list for improving energy efficiency and sustainability, UCI was named the No. 1 university in the country and the fifth in the world by the Times Higher Education in 2012 and the fifth in the world – under 50 old.

And in one of his final acts as UCI Chancellor, Drake presented the UCI Medal to President Barack Obama ahead of his memorable 2014 opening address in front of 40,000 students, family members, faculty, staff and supporters at Anaheim’s Angel Stadium. Michael and Brenda Drake received the UCI medal in 2017.

The private naming ceremony for Michael Drake Drive was across from the Gavin Herbert Eye Institute. On June 5th, Drake was the keynote speaker at the opening ceremony of the UCI School of Medicine.