A newborn university or a terraforming project in a strange world?

When viewed from the air in 1967, the University of California at Irvine looks like a radical experiment reshaping and reshaping the earth, its geometric shapes and bold colors, in contradiction to the irregular contours of the beige land that surrounds it. But the location of the school wasn’t Mars. It was the Irvine Ranch, an agricultural empire whose grasslands and orange groves then spanned 93,000 acres of Orange County.

By fortunate coincidence, the ranch owner, the Irvine Company, got into the real estate development business around the same time that the regents of the University of California decided to open a new branch campus to quickly urbanize Orange County. In 1960, the Irvine Company donated 1,000 acres of rolling hills to a new UC campus that would anchor a master-planned suburban community on the company’s sprawling ranch land. Both would be named Irvine, and both would bear the imprint of a single designer: William Pereira, a former Hollywood art director turned architect.

The Irvine Ranch wasn’t Mars, but it was a tabula rasa on which Pereira could realize his modernist visions of the future. His master plan for the city of Irvine preserved wetlands and adapted to the natural contours of the land, but otherwise envisaged a suburb built from scratch, characterized by modernist planning principles such as the separation of automobile and pedestrian traffic. Similarly, his design for the UC Irvine campus boldly experimented with shape, dispensing with traditional features such as a central quad and masonry buildings.

The basic plan, which was worked out in conversation between Pereira, UC President Clark Kerr and UCI Chancellor Daniel Aldrich, consisted of two concentric rings. The first – a narrow, paved hiking trail – contained a central park that was planted with wide lawns and climate-friendly trees, and adorned with two picturesque lakes (never built) and a bell tower-like structure called the Centrum (also never built). The second ring – a wide, one-mile pedestrian zone – comprised five academic centers, one each for the humanities, engineering, life sciences, physics, and social sciences. A sixth gateway hub housed the library and administrative offices and connected the campus to the rest of the master-planned community of Irvine via a mixed-use city center. These six hubs radiated out of Central Park like spokes on a wheel. Each of them had a specific place on campus, but the students could easily move from one to the other in ten minutes or less. 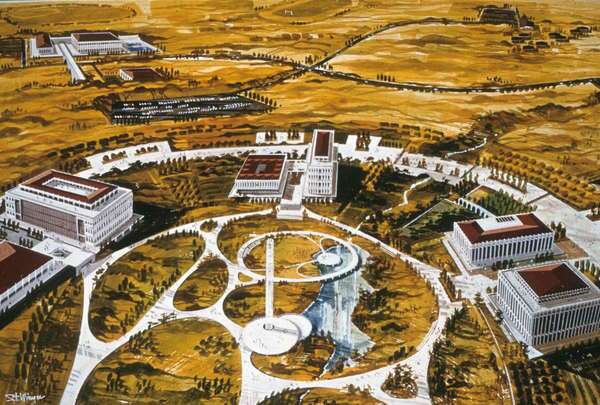 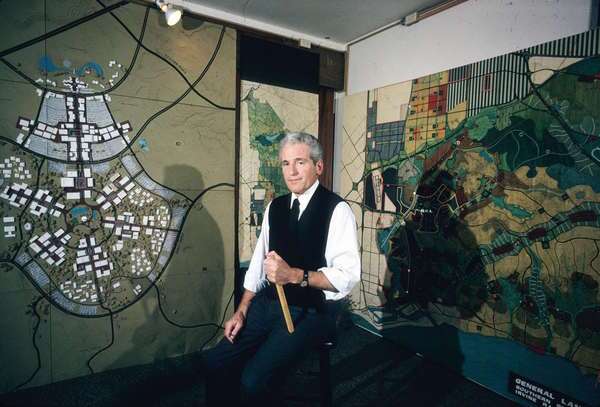 William Pereira, pictured here in 1964, also designed the Transamerica Pyramid in San Francisco, the UCSD’s Geisel Library, and many buildings in Los Angeles. Courtesy of the UC Irvine Libraries special collections and archives.

Construction began in 1961, and when the as-yet-unfinished campus opened to students in October 1965, it seemed like a hopeful model for the future. The brutalist buildings (a term derived from the French Béton Brut for “raw concrete”) exuded futurism in function and form. Their striking concrete façades, for example, shaded the classrooms from the full harshness of the southern California sun and caught the prevailing breeze on land, thereby passively regulating the university’s energy needs.

But the utopia soon turned into dystopia. When student riots struck other UC locations in the late 1960s, the same brutalist forms represented an entirely different future. Paranoid urban legends circulated about how Pereira’s draft discouraged student rebellion and strengthened administrative authority. However, Pereira ended most of his original plans long before the Berkeley protests in December 1964, which sparked free speech. In 1972 the campus starred in “Conquering the Planet of the Apes” and played a city in a totalitarian state of the future. And in 1977 the University replaced Pereira as the campus architect, more or less parting with its original plan.

LA, Irvine ranks in the top 20 on the list of the best…

Today, as UC Irvine celebrates its 50th anniversary, later development and mature landscaping is somewhat obscuring Pereira’s original design for the campus. But it survives with clarity in the university archives. The UC Irvine Libraries’ special collections contain renderings, project workbooks, and photographs – a small selection of which are below – that reveal an architectural vision that has been uncomplicated through half a century of history. 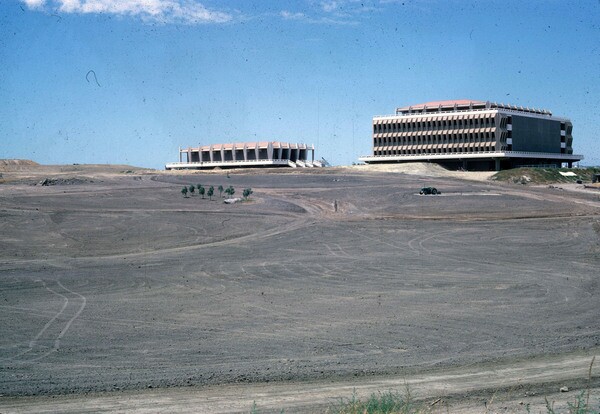 UC Irvine’s Central Park, since then named in honor of the University’s inaugural Chancellor, Aldrich Park, is under construction in September 1965. Courtesy of the UC Irvine Libraries special collections and archives. 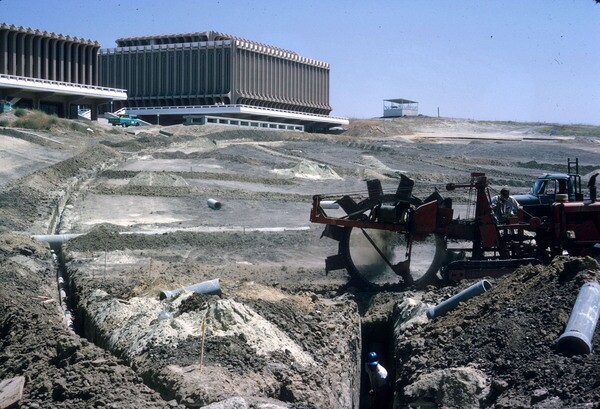 Another view of Aldrich Park under construction from September 1964. Courtesy of the Special Collections and Archives, UC Irvine Libraries. 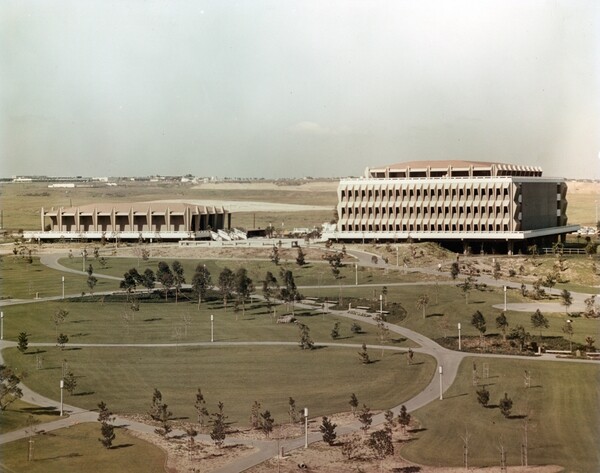 Around 1967 view of Central Park after its first landscaping. The Science Lecture Halland Natural Sciences Building hovers behind the park. Courtesy of the UC Irvine Libraries special collections and archives. 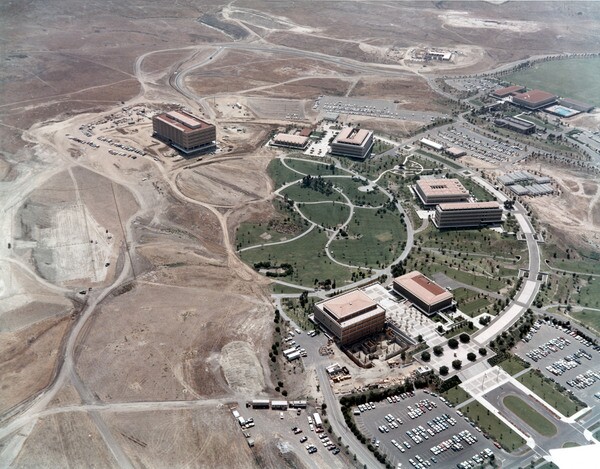 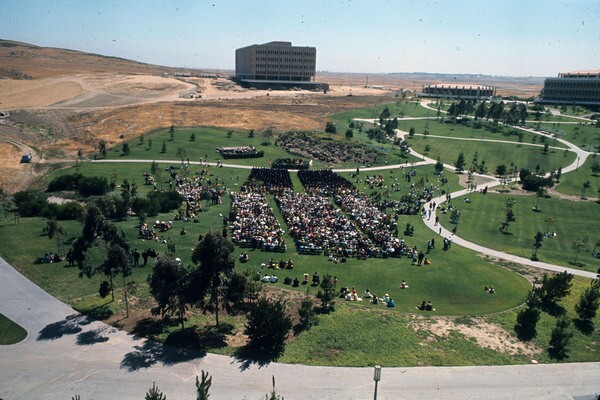 Graduated from UCI Central Park, circa 1966. Courtesy of the UC Irvine Libraries Special Collections and Archives.

LA, Irvine ranks in the top 20 on the list of the best cities to live without a car…