Everest: A new chapter in the search for the British climber Sandy Irvine

The question of whether George Mallory and Sandy Irvine were the first to climb Everest in 1924 has puzzled climbers for generations. Almost 100 years after they disappeared into the clouds, Mark Synnott set out to solve the mystery 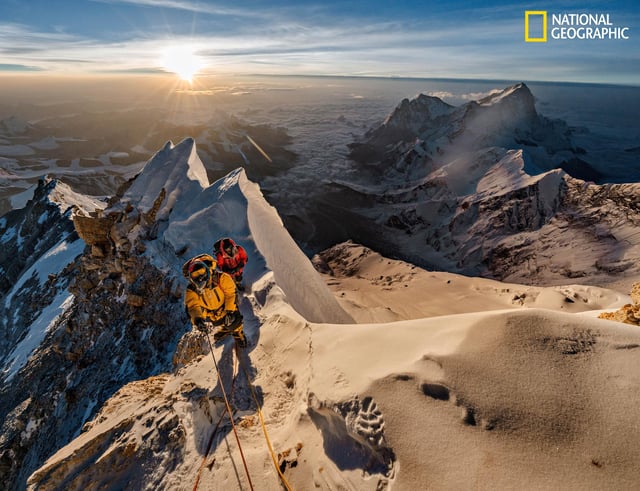 As the sun rises over the Tibetan plateau, Pasang Kaji Sherpa (front) and Lhakpa Tenje Sherpa pass 28,700 feet on Mount Everest. The big question: did George Mallory and Sandy Irvine get that far in 1924 – or did they reach the top? (PIC: Renan Ozturk / National Geographic)

The Mount Everest ethic could sustain an entire season of Radio 4’s Moral Maze. How satisfied are we with the idea of ​​rich western climbers paying poor local sherpas to carry their bags, cook their food, and risk their lives so they can reach the top of the world? Do we agree with the enormous amount of garbage that is thrown on the mountain every year? Some of it is thrown off by climbers near the summit and just before the end of their leash, but much of it is still lying around at base camp, where the excuse, “If I tried to carry her down, I don’t think I’d have her alive.” brought back, guv “doesn’t sound nearly as convincing?

Can the whole circus be justified by the logic of the trickle-down economy? Almost 70 years after Tenzing Norgay and Sir Edmund Hillary’s historic first ascent of Everest, the Khumbu region of Nepal, where most of the Sherpa leaders come from, has a per capita income five times the national average. So there was clearly a not inconsiderable trickleage. However, given the average annual salary in Nepal on the order of £ 2,500, it is unlikely that Namche Bazaar residents will be buying second homes in Cannes anytime soon.

Then of course the question arises of the overcrowding of the approaches to the summit in the so-called “death zone” over 8,000 m, in which the human body uses up its oxygen storage faster than it can be replenished. Each year, during the high climbing season in May, we patiently look into the queues of brightly climbed climbers lined up in a row below the Hillary Step (or where the Hillary Step was before it fell off) and wait few minutes until it is their turn at the world’s most coveted selfie spot, reading lists of the deceased each year, either on the way up or down, wondering if the rewards can possibly justify the risks. That is, every year, with the exception of this one, because in 2020 Everest will take a break thanks to the coronavirus after Nepal and China have suspended all climbing expeditions.

But even though no one is climbing the tallest mountain in the world this year, it is still making headlines. The cover story of the July issue of National Geographic is a play by climber and journalist Mark Synnott, titled The Great Mystery of Everest, and is about his attempts on a 2019 expedition to locate the body of British climber Sandy Irvine with George Mallory may have been the first to climb Everest in 1924 when Big Ed Hillary was just arriving for his fifth birthday.

Good old-fashioned adventure stories have been less numerous on her pages since 2014, when Susan Goldberg took over as editor-in-chief of National Geographic. Synnott’s feature, however, is very 2013. Synnott was encouraged by Everest veteran Thom Pollard and relied on drone surveys by Mallory and Irvine fan Tom Holzel (see video above). He set about examining a small crack in the north face of the mountain below the summit that Holzel had identified as Irvine’s likely final resting place. Mallory’s body was recovered in the area in 1999, but Irvine’s body was never found. Crucially, he was the one who was supposed to be carrying the duo’s camera. So if you discovered your body, you could also solve the mystery of whether the couple made it to the summit or not.

Like pretty much anything to do with Everest, the ethics of Synnott’s expedition were labyrinthine and, to his honor, he isn’t shy about exploring them. In the eleventh hour, it turned out that his 12-person Sherpa support team did not know the real reason for his visit and were not too happy about it. They preferred a quick, no-nonsense trip to the summit and back, and were appalled at the idea of ​​their client burning precious minutes in the death zone searching for a hundred-year-old corpse. As Synnott made his way to the summit, it seemed to him that this conflict had been resolved, and the Sherpas had agreed to make his detour on the way down. At the critical moment, however, as he got off the beaten track and headed for the rift in search of Irvine’s remains, he heard the guide Lhakpa Sherpa shout, “No, no, no! Very dangerous, very dangerous! “

What to do? Carry on and possibly endanger the whole party? Or do you turn around and head back to base camp even though Irvine’s body may be just a stone’s throw away?

Matthew Irving (left) and Mark Synnott suck deep on their oxygen masks in the death zone air, following a solid line to the northeast ridge at an elevation of about 27,000 feet – higher than any but five mountains in the world. PIC: Renan Ozturk / National Geographic

It’s not really a spoiler to say that Synnott decided to move on in the end but didn’t find what it was looking for. The most interesting thing about his report isn’t what happened or didn’t happen, but rather his honest, clear analysis of his reasons for doing the way he did. After starting with a deeply exhausted look at the entire Everest scene, he ends his essay with the following line: “I had no answers. But I had learned something about the pull of Everest that makes people dodge so hard, because if I hadn’t followed in Sandy Irvine’s footsteps, I would never have felt it myself. “

For the full story of Mark Synnott’s search for Sandy Irvine, see the July issue of National Geographic Magazine or visit www.natgeo.com/everest

The top of the world seems as far away as the Milky Way from Advanced Base Camp, where more than 200 people sprawl over a quarter mile of glacial moraine. The summit is the summit on the far right, barely visible behind the snow-covered saddle of North Col (right). PIC: Renan Ozturk / National GeographicThe cover of the July 2020 issue of National Geographic magazine

The Irvine Parks Guide 2020 has arrived